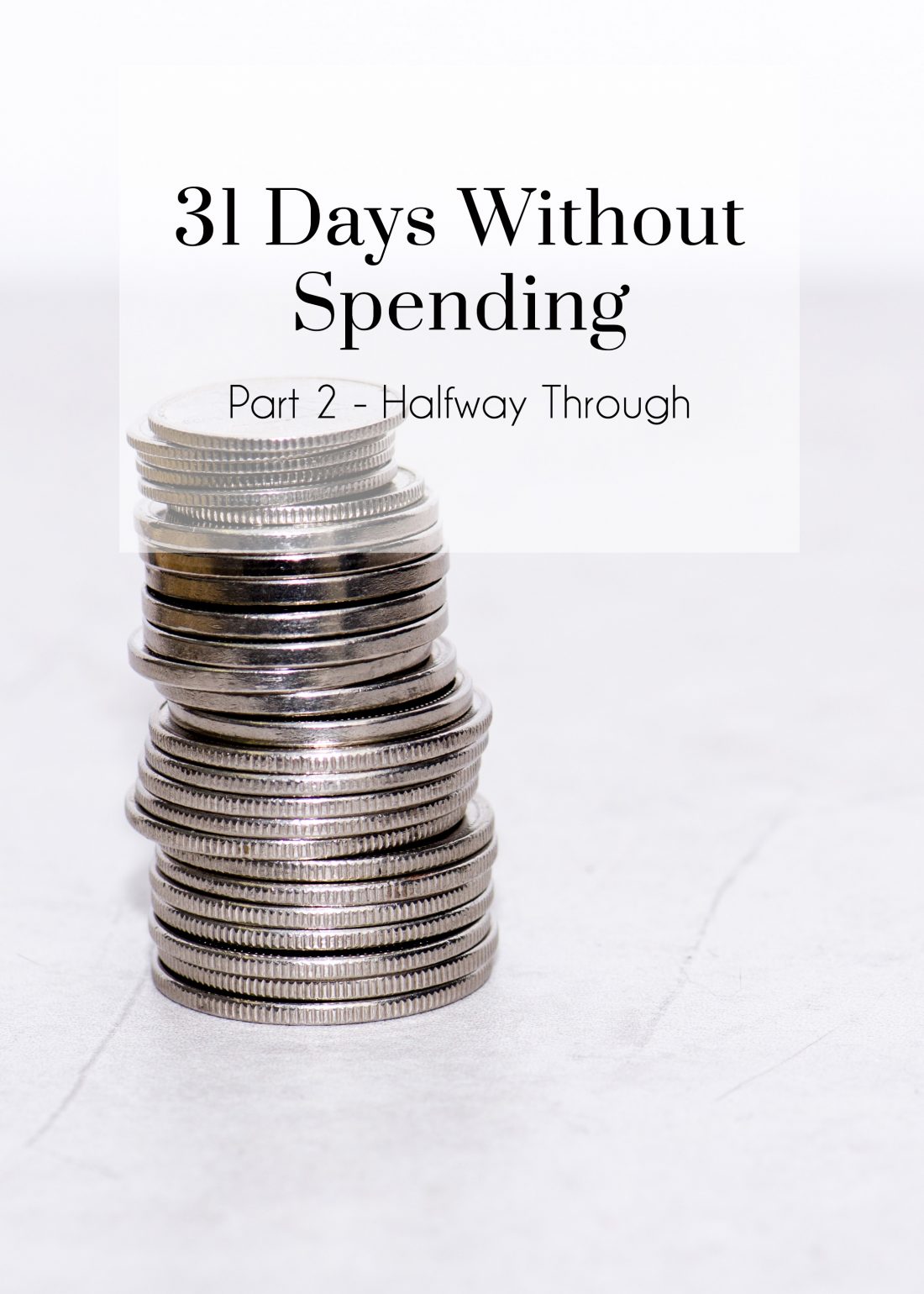 We are a little more than halfway through our Spending Freeze (woo hoo!). Here is an update on how it has gone, so far.

To review, we started our 31 Days Without Spending (i.e. Spending Freeze) on July 1st with grand plans to save money, invest for the future, establish healthier spending habits and rediscover the joys of living simply (lofty goals, I know!) But, as is the case with so many well-intentioned endeavors, disasters (that’s right, more than one) struck throwing us for a huge loop, effectively sabotaging our plans and crushing our dreams of coming out ahead. It’s possible that I’m being dramatic, you can be the judge.

Here’s how it went…

The first few days were HARD. I didn’t realize how accustomed I had become to spending on things that- under the plan – were not necessities. So many times I would think, “I’ll look online and see if I can find what I need.” (Insert Amazon purchase.) Or I would plan to order takeout when we didn’t feel like cooking. Those knee-jerk purchases were exactly the things that inspired the Spending Fast in the first place and, let me tell you, those habits were hard to break.

After a few days, the difficulty started to fade and I began to feel really good about myself. I remember on day seven thinking about how much I would probably have spent by that point in month’s past and feeling really proud to have saved instead. But, like I said, disasters were ahead.

The second week of July we had arranged to take our car in to get some routine maintenance. I absolutely hate spending money on the car. I’m not a car person. I could care less what we drive (as long as it’s safe) so spending any money on it just annoys me. We rarely drive, so I rarely think about the car….until things like this come up.

We get a call from the mechanic who said that our car (which is 7 years old) needed thousands of dollars in repairs. That’s right, thousands- plural.

I was dumbfounded. I didn’t think that it would be $50 or anything, but I never dreamed that it would be multiple thousands! The things that needed to be replaced were seriously words I had never heard in my life. It’s hard not to feel like you’re getting ripped off when you don’t even understand the explanation of services. Basically, the issues were in the suspension, which (apparently) is pretty essential to safe and comfortable driving. The mechanic was explaining the “domino-effect of problems” that could arise if we didn’t fix these issues right away. So, clearly we had no choice. We had to pay it. Ughhhh (a thousand eye rolls).

Whilst processing that, we get a knock on our door. It was our new upstairs neighbor, who had been doing some renovations on his place (some loud, very disruptive renovations, but that’s a rant for another day). He came to tell us that, while he was away on a camping trip, his unit had flooded. He arrived home to find his newly refinished hardwood floors waterlogged from the kitchen all the way to the front door and down the hallway to the guest room. So, being his downstairs neighbors, there was a chance that we too would have water damage. Fantastic.

He assured us that “his guys” had assessed the damage and reported that- if there was damage to our unit- it would be slight and he would take care of everything. We closed the door and breathed a tiny sigh of relief. It was nice of him to let us know and good news that we probably wouldn’t have much (if any) damage. Most of all, we just felt really bad for him and all of the damage and expense he was dealing with, only a few days into living in his new place.

“His guys” were wrong. A lot wrong. The next morning, while making coffee, I notice that we had a small water stain developing on our ceiling. F*!k.

The water remediation guy informed us that the damage was in the ceiling in our kitchen, hallway and the worst of it in the baby’s room. Long story short, holes were cut, trim removed (and broken) industrial (read: big and very LOUD) fans were placed in all three locations and the baby was relocated to another room. The biggest fan was in the kitchen, blocking the oven and stove, which made eating at home extra difficult. After four long days, the crew came back, sprayed anti-microbial solution in our ceiling and left us with a bunch of holes but- thankfully- no more water.

We had to hire a separate crew to patch the holes and repaint the ceiling. Our kitchen is open to the living room and hallway and the ceiling is one continuous plane. This meant that to cover a 4×2 inch water stain, the entire ceiling had to be repainted. 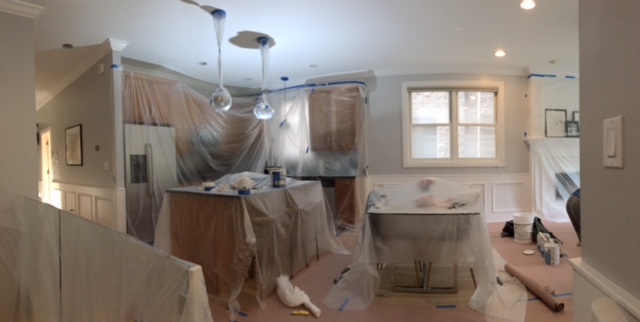 We haven’t even finished all of the repairs yet and the total is already over $1300. Our neighbor had a bit of a change of heart when he realized the extent of the damage. Suddenly “I’ll take care of any damage” became “I hope to be able to cover some of it.” Apparently, here in Chicago, damage to one unit- even if it’s caused by another unit- is the responsibility of that unit’s owner. It’s a little bit like no-fault car accidents. How nice for us.

In an effort to maintain peace in the building- keeping in mind that we have to live below this guy for at least the foreseeable future- we agreed that we would cover a portion of the work and he would reimburse us for the rest. We were happy to have a resolution, but really bummed to have had to pay for any of it (you know, since it was entirely not our fault.)

The third disaster was more like an unexpected, unpleasant surprise. We got a bill in the mail for our daughter’s hospital stay (immediately following her birth). She is 14 months-old and they just sent this (1,000th bill) this week! I don’t think that should be allowed, but alas we are having to deal with it now. Apparently, one of her many many doctors was out of our insurance network. The bill was many thousands of dollars- well over the cost of the car repairs. Ouch.

As I write this, we are on day 19. We have begun to recover from all of our unexpected disasters. I’m not going to lie, there were tears shed, but I’m trying my best to stay positive. Our car is back in working order and our home is dry. Our commitment to our Spending Freeze remains. My best friend pointed out that – had we not taken the initiative to proactively save- these disasters would have hit us a lot harder. She’s right, of course, but we’re still pretty sad to have lost SO MUCH money in only the first half of the month that we expected to be saving.

11 days to go. Fingers-crossed that they go a little better.

Shows to Catch Up on this Summer