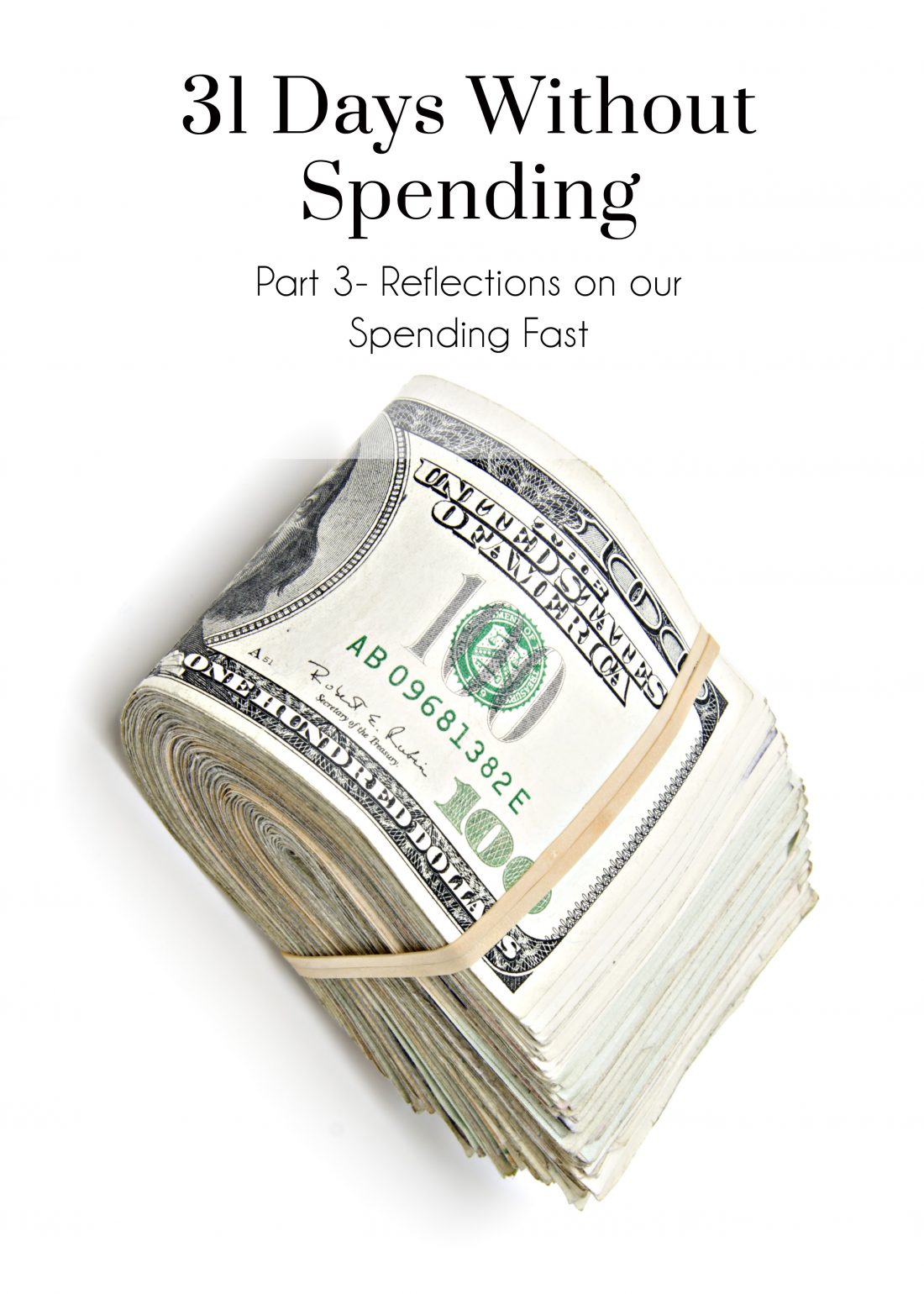 31 Days Without Spending – Reflections on our Spending Freeze

We did it! We made it through an entire month without spending!! Well, very nearly. We did break the Spending Freeze a couple times, which I will explain below, but by and large it was a success!

Let’s review. In an effort to prepare for some long-term investments, we decided to do a Spending Freeze for the month of July (31 Days Without Spending- Part 1). It was hard to break old habits, but after a week or so the temptation to spend on non-essentials faded and we got used to only buying necessities. A few big (expensive) curveballs were thrown our way, (31 Days Without Spending- Part 2) but we made it through with only a couple slip-ups.

1) A dinner with a dear friend who I hadn’t seen in a while. I knew that I could delay the dinner until August, but we hadn’t seen each other in some time and I felt like it was important to not put it off. This particular friend was there for me during one of the most difficult times of my life, so her friendship is really important. The dinner was lovely and reminded me how critical it is to nurture friendships, so it was definitely money well-spent. Total: $41

2) Gift card overage. One night we were heading out of town (not wanting to cook or make a mess) and we ordered dinner from Eat Purely (my favorite food delivery service). We had a gift card that covered the majority of it, but not all. Total: $3.71

We spent a grand total of $44.71 on non-essentials the entire month! Not bad, right?!  In month’s past, I could easily have spent that much (or more) in 15 minutes at Target.

I’m not including the birthdays that we had pre-planned for or all of our unexpected “disaster” expenses- car repairs, flood damage and medical bills (I won’t give you that number because it will just be depressing for all of us). While they weren’t planned and weren’t groceries, they were necessary and unavoidable expenses. We mitigated those costs (somewhat) by taking on some of the flood repairs ourselves and sourcing our new tires (ugh) from a much-less expensive shop, which helped a little.

I’m so glad we did it! It was tough, at first. It is so easy to buy anything and everything that crosses my mind. And convenience has taken priority over everything else lately. I wasn’t realizing how much I was actually spending. $20 here, $15 there- it really added up. But after 31 days of buying nothing, I realize that I don’t need most (if any) of that stuff.

Early in the month, I made a list of things that I would buy after the Spending Freeze was over. But after a couple weeks, I found that I had stopped adding to it. When I got it back out, at the end of the month, I decided that I only wanted a couple things. A photo book of our daughter’s first birthday party and cute clips for her hair – so nothing crazy, but arguably non-necessities. (If you saw her bangs, you might argue that the clips were a necessity.) Fortunately, waiting until August to order her book saved money because the printing company was having a 40% off promo! Score.

Not spending money (except on necessities) for 31 days felt amazing. I was so much less wasteful and so much more purposeful with my money. I would have had a lot more in my bank account than at the end of a typical month if it hadn’t been for the 3 “disasters”. However, if we hadn’t been on a Spending Freeze, those 3 “disasters” would have hit us a lot harder. So, in a sense, they came at the best possible time. (Not that there is ever a good time for a flood.)

When we wanted to go out, we had to think of activities that were free. Luckily, summertime allows for a lot of free activities outdoors. This might have been much more difficult if we had taken it on in January. When we felt the impulse to order food, we had to challenge ourselves to come up with something creative with what we had in the fridge and pantry instead. We actually had several great dinners with odds and ends thrown together. Finally, when we wanted to buy something, we had to wait…and wait…and wait, until we didn’t really want most of it anymore.

Ultimately, a Spending Freeze is an extreme measure. We took it on to 1) see if we could do it, and 2) jumpstart efforts towards our long-term investment goals. I’ve never been a particularly disciplined person, so I can say with 100% certainty that I wouldn’t be able to keep it up forever. And I wouldn’t want to. There are so many fun things to spend money on that truly bring us joy. But I do think that the experience has done a lot to reform our spending behaviors and temper our impulses.  When I placed that first online order in August, I actually felt bad to have spent the money- even though it was for something that I genuinely wanted.

The one thing we missed the most was eating out. Part of the reason we love living in the city is the great restaurants. Bill is a big foodie, so never eating out felt a little bit like a punishment. And eating out is as much about the experience as it is the food. Taking a family walk to the ice cream shop so the baby can try her first taste of Brambelberry Crisp is a memory that we just can’t replicate at home, with a pint from the grocery store.

But not all expenditures bring us joy. In fact, most of what we were spending on brought us no joy. The biggest thing the Spending Freeze taught me was to be more careful and considered with my money. Everything can be approached from a cost/benefit perspective. Spending $20 on lunch at a sandwich shop, because we didn’t pack our lunches before work, would net us a benefit (besides sustenance) of essentially zero. We weren’t making any memories standing in line waiting for our order number to be called or eating those sandwiches at our desks soon after.  Meeting an old friend for a cup of coffee, on the other hand, feeds the soul and benefits us on many levels, so it absolutely confers a benefit that outweighs the cost. Armed with this new perspective, we decided that we would take what we learned through the Spending Freeze and apply it to a set of spending guidelines and a budget.

If it doesn’t bring us joy, contribute to a special memory, or make our lives substantially easier, it doesn’t deserve our money. But, even joyful expenses should be kept under control, so we will set a monthly budget for eating out, entertainment and shopping, to keep us in check. I also found that a mandatory waiting period before purchasing anything new (and non-essential) is key to saving money. This rule is particularly applicable to Amazon purchases. If I still want whatever the item is, after 24 hours, I can buy it. No more one-click ordering.

(This reminds me of Netflix’s Gilmore Girls Revival, when Emily reads The Life-Changing Magic of Tidying Up and decides to throw out everything that doesn’t bring her joy. She walks around the house shouting “no joy!” This is me now.)

As an aside, if you’re trying to curb your online spending, I’ve found that it is a good idea to delete your credit card information from all online retail accounts. The act of finding my wallet, getting out my card and typing in the numbers creates a delay and often makes me second-guess whatever it is that I am buying.  Maybe it’s laziness, but if I have to put all that effort in, I might not do it. The same can be said for Paypal. Best to avoid it all together. It’s too easy to just mindlessly click and spend.

Bill is extending his Spending Freeze for another month, just to see what it will be like without all of the “disasters”. (Fingers-crossed nothing else comes up). For me, I have his birthday in August and a trip with friends, so I am going to just focus on following our new guidelines, approaching everything with a cost/benefit analysis and sticking to the budget. Hopefully this Spending Fast has been the beginning of a new more purposeful, less wasteful relationship with money. We’ll see!

Do you have any money-saving tips? I’d love to hear them!

Shows to Catch Up on this Summer

Welcome to The Busy Girl Blog!